We took a trip to the local arboretum for a fall pumpkin exhibit and found several recipes posted (including this pumpkin bread recipe) that used pumpkin as the main ingredient.

Making bread from scratch can be somewhat time consuming but around Christmas or during the holidays baking can be fun for the whole family, especially is you have guests coming into town. 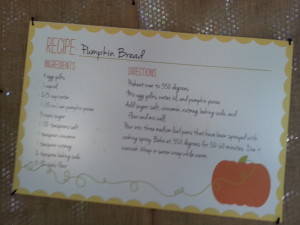 Celebrate and toast to Canada Day with this top Canadian Cocktail recipe!

Directions: Shake all ingredient into cocktail shaker and pour over ice into glass.

The most familiar and most sought after Easter holiday treat… the cream filled chocolate egg! Did you know that the cream filled egg dates its origins back to the 1920’s? It wasn’t until the 1960’s that the Cadbury brothers introduced the tasty Easter themed treat to the world as we know it today! You might even think that the Cadbury is Made in the USA, however, a fun fact is that the chocolate is actually Made in Canada.

The original cream filled egg is a milk chocolate shell with a cream filled fondant, however, as time has passed by so has the vision for the original dessert. Other flavors and different sizes have been introduced making it a semi-versatile chocolate treat.

The flavors that you’ll find sitting next to the cash register or in the chocolate isle of your favorite store include:

There is no information if these eggs discontinued, but they are no longer listed as official flavors by Cadbury:

The typical thing to do on Valentine’s day is cook a meal – or at the very least a treat – for your loved one. The problem is that it’s hard to figure out what a good romantic recipe idea is! There are however certain basic easy flavors that relate to Valentine’s Day – once you find these, you’re well on your way to making the perfect Valenday Day Menu!!

A classic Christmas flavor is eggnog, but what many people do not know is that you don’t just have to have plain old eggnog! Around Christmas time you’ll find all sorts of Christmas flavored goodies! Here are some of the best eggnog flavored foods out there that you’ll want to try with that special someone… 😉

1. Eggnog flavored cupcakes – great gift to bring to your parents house on Christmas Eve or Christmas day!
2. Eggnog flavoed coffee- They have special holiday blends of coffee that go right in your K=cup – the eggnog flavor is a don’t-miss holiday treat!
3. Eggnog Smoothies – restaurants and shops are all whipping up special eggnog flavored shakes!
4. Eggnog flavored gumballs – a special holiday treat that you can get right on amazon!
5. Eggnog flavored pancakes! – start your morning right – simple recipes can be found with a quick google search!
6. Eggnog Truffles – you lie truffles? Try these this Christmas!
7. Eggnog Icecream – make this yourself with part icecream, part brandy or whiskey, part cream, and a dash of nutmeg!
8. Eggnog Popcorn – yup, they make it alright!!
9. Eggnog pudding – delicious!
10. Eggnog French Toast – breakfast!!